I had hard time with breeding green babaulti shrimps. The problem was quite stupid, I had only females. After some search I found some babaulti for my female-only colony. Shrimps started breeding and I was very happy seeing a little ones.

But it was another disappointing, all shrimplets were brown. They were looking like several non-green shrimps I got with green ones. I moved those non-green shrimps into another aquarium. One of them was a nice red babaulti shrimp. All my newborn baby shrimps were brown and I was afraid that I just will have common rainbow shrimps colony at the end. Rainbow shrimps are the same babaulti species but without stable color. They can be from silver till red, but usually they are brownish.

The happy end of this story is shown on a video. After some time baby shrimps grown up and become nicely green. They all green now. Look at the video with a couple of them.

This video has been made 2 months ago.
The shrimps are young adults now. Look at the photo of one of them below: 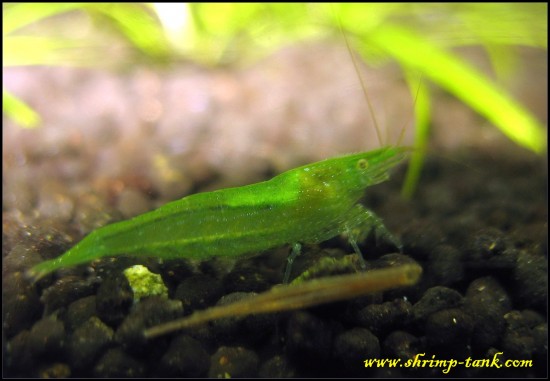 You can follow any responses to this entry through the RSS 2.0 feed. You can leave a response, or trackback from your own site.