Stringy or thread algae in a shrimp tank

One of the nastiest types of algae is stringy algae. It looks like a flock of bright green hair in your tank. ‘Hairs’ can be very long, 1 feet or more. These type of algae also called thread algea. 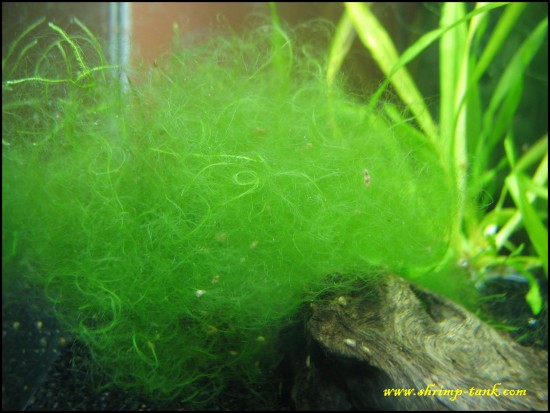 Shrimp-Tank.com Thread or stringy algae growing on a moss.

Algae threads are quite strong and it’s usually possible to take one of it and pull it out. If you are lucky you can pull out a group of threads by dragging one of them. I usually collect that algae by winding it around a long wood stick and then pull everything out.

Removing some part of this algae is absolutely not the same as cleaning aquarium out from it. In some aquariums like you see on the picture, it’s just impossible to clean. Stringy algae can be collected and pulled out from big-leaved plants, but not from tiny-leaves, grasses or mosses. The algae will cover moss and grow inside a bush of it. Top part or algae can be cleaned out, but some it algae still be be left and will regrow fast.

Finding this algae in a tank you should take it seriously and try to remove it as soon as possible. If it’s only a beginning, you would probable be able to manually collect strings from one or several sources you see in tank. Cleaning big stem plants is not a problem. Bigger problem appear with mosses or grasses covered with stringy algae, it’s best to just remove them from a tank and not let the algae spread.
It can stop actively grow in not suitable conditions (low light, lack of nutrients and iron), but it will not die. If you was able to stop it from growth, then you should consider manual cleaning a tank from it.

Algae eating fish like Siamese Algae Eater (SEA) will consume it, but only after all the other tastier algae is gone. Amano (yamato) shrimps will eat it. But again, this algae is quite rigid and hard for them to chew, so they will regale themselves with other softer types of algae first.
Stringy algae is grown well having excessive source or iron in aquarium.

The worst part with this algae that dwarf freshwater shrimps we are keeping don’t eat it. It’s to hard for them. So, it’s useless for your shrimp tank. It’s better to clean it out until or destroy your plants by turning them into green tangles. Look at the photo of java moss covered with this algae.

You can follow any responses to this entry through the RSS 2.0 feed. You can leave a response, or trackback from your own site.